I recently came across a tweet with the Hashtag #ILookLikeAnEngineer on the MIT Engineering twitter feed. Launched a few days ago, the hashtag is gaining momentum and has inspired a storify feed created by Canadian Nick Heer: https://storify.com/nickheer/ilooklikeanengineer. The feed is a collection of twitter posts from a variety of people sharing the hashtag #iLookLikeAnEngineer.

The initial concept for the hashtag appears to have been inspired by a female engineer, Isis Wenger who was a participant in a recruiting campaign launched by OneLogin. Although not originally intended to highlight the problems with gender profiling in the industry, it was interesting to see the attention the campaign had received. Isis wrote about it on Medium; a blog-publishing platform. In an effort to point out the diversity in the type of people who hold the title “Engineer”, Isis is now working on launching a new website www.ilooklikeanengineer.com, as a platform for users to continue to share stories and experiences relating to diversity issues in tech.

She is also introducing This Is What an Engineer Looks like… an awareness initiative to help facilitate concise plans of action and spearhead change in the perceptions of what an Engineer looks like. 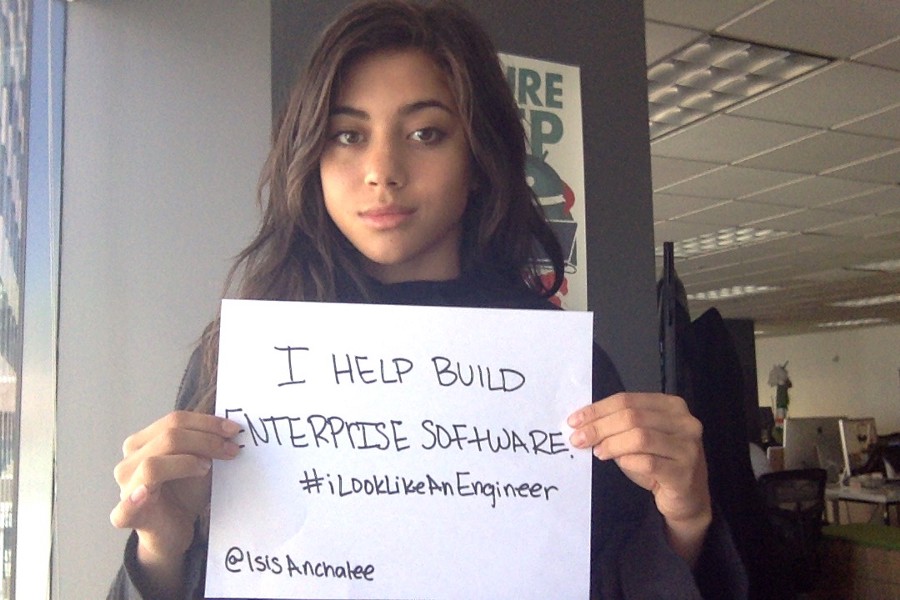 To support the initiative and the message, she has launched a Crowdfunding campaign to create a #ILookLikeAnEngineer Billboard. The billboard will display all the shapes, sizes, colors, genders, ages and backgrounds of the engineers, to celebrate and encourage their diversity—and show that there’s more than one way to look like an engineer!

One of the comments on the blog included:

“I work at a company with a lot of female engineers and you know what they look like? People. All kinds of people. Short, tall, round, skinny, with glasses or without, wearing a conference tee or a dress from Banana Republic, brown skin, tan skin, curly hair, straight hair, etc. Because engineers are people and people are diverse. I think the campaign did a good job of trying to portray that, and if people think differently, well, that’s on them.”

There is also an event planned on August 13th at Rackspace in San Francisco, where they are planning to get together and network.  Photographers will be present to collect portraits of willing attendees for the billboards.